In this article, we provide you with information to effectively analyse the Airbus share price. You will of course also find a detailed presentation of the Airbus Company and its activities as well as information on the principal competitors of this group, its recent partnerships and advice for completing a fundamental analysis with its strengths and weaknesses as well as opportunities and challenges that lie ahead. 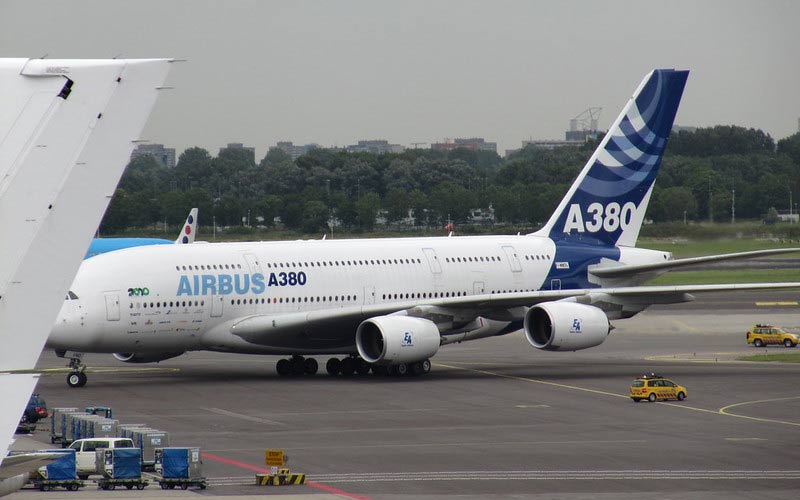 Discover a complete update on the situation of the French group Airbus as the US government has just announced the maintenance of the 15% tax on imported French aircraft and other products.

Of course, given the activity sector that this company exercises its activities in it is important to closely follow the activities and economical health of the major airlines. This information will of course influence future orders from this aircraft producer.

The publication of this company’s financial data takes place every quarter as well as annually and these are also items that should be carefully examined, notably if you compare them with the targets foreseen by the group which are regularly published.

It is also possible to anticipate the financial results of the Airbus Company using data related to orders over the last few years. Of course it is also recommended to follow announcements related to the signature of contracts with airline companies.

The reputation of Airbus Group aircraft is primordial to the company’s success so it is therefore extremely important to carefully monitor all events that could impact its brand image such as possible technical problems, accidents or the launch of new innovative aircraft.

Finally another thing that could indirectly influence the Airbus Group’s activities is related to the fuel price and therefore the petrol price which can be followed on the commodities market.

General presentation of the Airbus Company:

To begin this article we will first provide a general but comprehensive presentation of the Airbus Group and its activities. This information will assist you in better understanding the economical environment of this group and therefore its growth possibilities for the coming future.

The Airbus Group is a French company specialised in the aeronautical, space and defence sectors. In fact Airbus is currently the European leader in this general activity sector and it also holds second position worldwide just after Boeing, the latter is of course its major competitor and we shall examine this company in more detail later on in this article.

To better understand the activities of the Airbus Group it is possible to divide them in different categories according to the turnover that they generate and how they do so:

It can also be beneficial to understand the geographical distribution of the group’s activities. This company in fact achieves only 27.9% of its turnover in Europe, 36.6% of this company’s turnover is from Pacific Asia, 17.5% from North America, 10% from the Middle East, 2.2% is from Latin America and the remaining 5.8% is from other countries around the world.

Know the competition to the Airbus Company shares:

As we examined earlier, the Airbus Group currently holds second position in its activity sector worldwide just after the American company Boeing. However, to all intents and purposes these two companies are the only major players and share the vast majority of the global commercial airplane market between them. Understanding and knowing about the Boeing Group is therefore primordial for taking into account this competition when completing your analyses.

The Boeing Company is an American company that is also specialised in aeronautical construction and is currently number one in this activity sector worldwide. In particular it manufactures and sells commercial airplanes as well as replacement parts and provides technical, maintenance, engineering and support services. But Boeing also operates in the defence sector with the production of military aircraft and mobility systems such as airplanes, helicopters, defence missiles, logistical support services, engineering, maintenance and training. Boeing also provides aerospace equipment such as satellites, launch pads and also offers commercial and private aircraft and aeronautical equipment financing. It is of course in the USA that Boeing achieves the majority of its turnover but the group is also very active in Asia, Europe and the Middle East as well as other places around the world.

When you complete your fundamental analyses of the Airbus Group be sure to take into account all the information coming from this sizeable competitor such as major announcements from Boeing, any significant news from this company as well as the launch of new products or publications related to finance.

The Airbus Group does not only count upon its strategies for growth and in fact it regularly implements major partnerships in order to boost its development. These partnerships are of course highly significant if you wish to trade effectively in this asset as their announcement can have a major impact on traders’ decisions as to how they will trade in the Airbus Company shares.  Here therefore to assist you in understanding the situation better are a few examples of recent partnerships between Airbus and other major companies.

Introduction and quotation of Airbus shares:

During the last decade the Airbus share price has experienced some interesting fluctuations. We particularly note a general rising trend over the whole period with a low point of 13 dollars in 2009 to a high point of over 130 dollars in 2019. However this overall positive growth has of course experienced a number of downward micro-movements.

In 2018, the Airbus share price finally broached the 100 dollars cap at just over 107 U.S. dollars but achieving this resistance level led to a strong downwards correction that brought the asset price to 83 dollars in December of the same year.

A good analysis of the Airbus share price naturally requires a good knowledge of its strengths and weaknesses. But these strengths and weaknesses will only serve to draw up a portrait of the current group without allowing you to see over the longer term. Therefore, if you are planning to take a position on this action in the near future and in the medium or long term, you must also analyse and monitor the opportunities and threats that will present themselves to the group, the details of which are given below.

First of all, note that the Airbus Group could seize several development opportunities in the years to come and thus improve its growth and increase its share price. Here are the main points that you should analyze in this regard:

Beyond these opportunities that Airbus could seize to increase its profitability, it is also essential to take into account the threats that may weigh on this value and lead to a slowdown in activity. Here are a few examples of concrete threats that you can analyse:

The advantages and strengths of the Airbus share as a stock market asset :

First of all, the positioning of the Airbus Group on the global market of the aeronautics, space and defence industry is of course a major advantage. It should be remembered that the group's only competitor remains the American group Boeing, with which it is constantly competing for the leading position.

As we have seen above through the presentation of this company, Airbus is active in various fields, mainly in civil aeronautics, of course, but also in defence and space and helicopters. This division of the group's activities into different segments and subsidiaries provides a form of protection against the risk associated with one and the same topical sector.

The fact that the sector of activity in which the Airbus Group operates is not very competitive is of course another advantage that you must take into account here. Indeed, it should be noted that this sector of activity is a sector with high barriers to entry and therefore limits the number of new players. This characteristic also makes it easier for the group to set prices that allow comfortable margins.

We also appreciate the good visibility offered by the Airbus group with regard to its future revenues. Indeed, the group's order book offers visibility over several years.

The Airbus group also offers the advantage of having an interesting positioning from a geographical point of view with sales in many countries of the world but above all a good presence in emerging markets which today represent more than half of the company's activities.

Finally, for several years now, the Airbus group has been pursuing a policy of increasing the rate of redistribution to shareholders, which naturally attracts investors.

Disadvantages and weaknesses of the Airbus share as a stock market asset :

Firstly, it is regrettable that the Airbus Group has a poor distribution of its turnover among its various subsidiaries. Indeed, it should be recalled that the vast majority of the group's revenues still come from the sole activity of commercial aircraft construction. A loss of momentum or a drop in demand from this sector could therefore present a major risk to the profitability of the Airbus group.

Similarly, the Airbus group must, in order to compete with its American competitor, be increasingly innovative. To do so, it must therefore invest a great deal of money in research and development, which has a major impact on its results. Indeed, it should be remembered that the group's current investments in R&D represent more than 4% of the company's total turnover, despite numerous efforts to reduce these expenses.

Although the Airbus group enjoys a strong reputation and a certain success in the field of commercial and civil aviation, it is regrettable that it is not able to achieve the same success in the field of aviation and military systems. Of course, we recall the Group's persistent difficulties with the commercial failure of its A400 aircraft in 2016, which weighed very heavily on Airbus' overall profitability by leading to significant costs.

In the space sector, Airbus may also fear stronger competition than in other segments. Indeed, the Space X group has been facing very strong competition for several years now, which could lead to a further loss of market share in the years to come.

Finally, the Airbus group's last weak point concerns its strategic control of operating profitability. This profitability has disappointed investors a great deal in the past years and, although it has been better controlled in 2018, investors are more cautious about publishing future financial results.

On which indices is the share of the Airbus group listed?

What underlying trend has been observed for the Airbus share?

In general, the price of Airbus shares has followed an upward trend since its first listing and today. We can therefore say that this title is relatively interesting in the long term. However, you must also take into account micromovements which can lead to lasting declines depending on the economic situation and the news of the group but also according to global strategies based on technical analysis.

Many indicators are to be preferred to anticipate future movements in the Airbus share price. In particular, we will appreciate direct economic information such as the group's order book, which provides a fairly reliable vision of future results, or even more indirect elements such as the health of the commercial and travel aviation sector, on which some of the activities of the group and therefore the attractiveness of its stock market activity.