Due to the truly revolutionary effect that Internet has had on our daily lives, numerous companies in this activity sector, particularly in the networks division, have come into being and some are now present on the stock markets. This is the case with the Cisco Company which we will examine here in detail with a historical analysis of its share price and explanations relating to its activity and history. 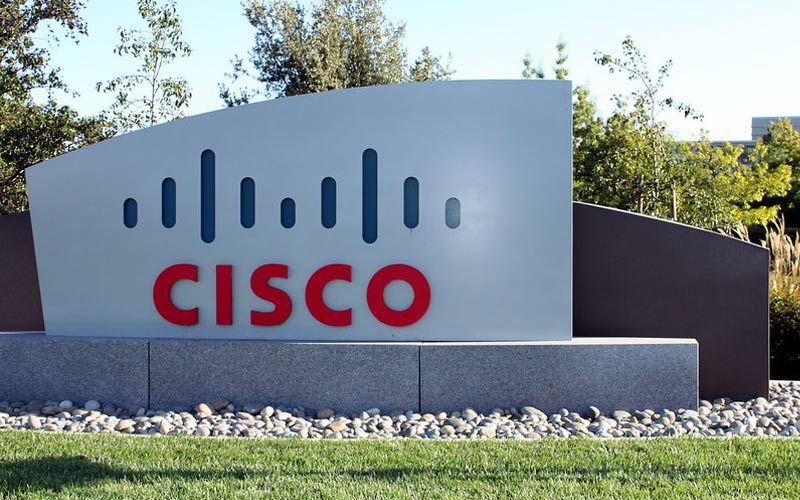 Learn more about Cisco Group's latest strategic acquisition, BabbleLabs, which will enable the company to improve the quality of its collaboration software in a rapidly growing segment.

The strategic partnership operations and the acquisition of other companies by Cisco will of course significantly influence the price of its shares as they are particularly followed by investors.

We would also closely monitor the development of intelligent networks that could, over the long term, benefit Cisco by increasing global demand.

In the same way, we would also closely monitor the growth in the use of Wi-Fi and mobile technologies that offer certain opportunities to Cisco.

Concerning the negative points, we would of course keep an eye on the significant increasing development of Cloud servers that could lead to a reduction of sales and profit margins of the Cisco Company.

The competition is of course another important element of the fundamental analysis of Cisco. You must also take into account the major competitors of this group from among the leaders of this market as well as the open source competitors. When analysing the competition you should in particular monitor the development of new products and movements in the market share of these major players.

General presentation of the Cisco Company:

The Cisco System Group is currently the market leader in the design, development and sale of network equipment for the internet. More precisely, this company achieves over 30% of its turnover through the creation of technological systems and software as well as switches, with nearly 23% solely from its assistance services, network design and development.

Cisco’s market share is mainly from the United States and Canada but extends to Europe, the Middle East and Asia Pacific.

Know the competition of Cisco shares:

Through its different activities, Cisco Systems is present in a number of IT sectors. Therefore, it faces competition from the major players in each of these specialised sectors. For an investor it is advantageous to know which are Cisco’s greatest competitors before starting to speculate on its share price online. Here therefore we offer you the opportunity to learn more about their competition.

In the technological equipment and communications sector, Cisco is in fourth position in terms of company turnover, just after Alcatel-Lucent, Allied Telesis and Avaya. It is followed closely by Ericsson, Huawei, Juniper and Nokia.

In the sector of IT software Cisco is only in 14th position worldwide. This sector’s primary positions are held by Microsoft, Oracle and IBM which are the current leaders, after which are HP, Adobe, CA Technologies and other companies.

It is important to monitor the movements of market parts of each of these companies when completing your analyses.

Introduction and quotation of Cisco shares:

The Cisco share price is currently quoted on the Pan European market of the NYSE ARCA Europe and is included in the calculation of the Nasdaq 100 stock market index.

A historical technical analysis of its share price displays some bullish peaks, the first in September 2007 at over $33, then another in 2010, and even at present with a share price of over $29.

To implement an intelligent online trading strategy with Cisco shares, it is above all necessary to understand the position held by the Cisco Company on the international stock markets. Here therefore is some general stock market information that will assist you in making fully informed decisions from an advantageous position:

To assist you in correctly interpreting the historical stock market charts of Cisco shares we now offer you the opportunity to learn about some major economical and financial events that have significantly influenced this company.

Advantages and strengths of Cisco shares as a stock market asset

Firstly, of course, the good international expansion strategy that the group has pursued for many years. Thanks to this strategy, Cisco now markets its solutions and products in many countries. It is thus better protected against the risks of geographically localized economic downturns.

The Cisco Group is also generating attractive margins and good profitability thanks to another strategy, this time in terms of the economies of scale it can achieve. These economies offer an intelligent and interesting reduction in production or supply costs.

Of course, Cisco's positioning in relation to its competitors and its industry is another undeniable advantage of this value. Indeed, let us recall here that Cisco is currently the leader in its field on the market. This gives it many advantages, including a strong negotiating power with its suppliers and partners.

Still with regard to Cisco's assets, we can mention the great popularity of this brand due to its many innovations. It should be noted that the group has a particularly strong research and development division that enables it to develop technological and innovative products. In particular, Cisco focuses its efforts on experimenting with better value products over the long term.

Finally, stock market investors also appreciate the good financial and economic performance of this company, which gives them a high level of reassurance.

If the Cisco Group has a good chance of developing positively in the years to come and therefore its share price on the stock market is also likely to develop positively, it is also necessary to take into account the possible shortcomings of this value and therefore to know the weak points that may affect this development. Here is therefore the list of the main weaknesses of this company.

Firstly, storage networks are currently in decline, which may of course, in the long term, be detrimental to Cisco's business and profitability.

It is also regrettable that the group is not more active in the field of BPO technologies and markets, whereas the other world leaders in this sector are already well established in this area. This situation is therefore likely to lead to a loss of market share for Cisco in the more or less long term.

What types of products are marketed by Cisco?

The Cisco group manages to stand out from its competitors through the diversity of its products on the market. These include, of course, network hardware, Network Management, Cisco IOS and NX-OS, interfaces, SAN storage networks, wireless transmission systems, telepresence, IPTV, voice over IP and data processing centres. These segments should therefore be known and studied as part of your analyses of this value.

When and how did Cisco's IPO take place?

The date of Cisco's IPO was 16 February 1990. The company thus entered the American Nasdaq market and more specifically the Nasdaq Global Select Market at a price of 10 cents per share. But this introduction will not reach the hoped-for performances and this failure will moreover lead Leonard Bosack, its managing director at the time, to resign.

Who are the main private shareholders of Cisco?

Cisco Group is partly owned by private and institutional investors including The Vanguard Group for 8.12%, Capital Research & Management for 6.24%, SSgA Funds Management for 4.50%, BlackRock Fund Advisors for 2.29%, Putnam for 2.11%, Wellington Management for 1.62%, T Rowe Price Associates for 1.50%, Northern Trust Investments for 1.46%, Geode Capital management for 1.44% and Managed Account Advisors for 1.22%.

--- Advertisement ---
Trade in Cisco shares!
76.4% of retail investor accounts lose money when trading CFDs with this provider. You should consider whether you understand how CFDs work, and whether you can afford to take the high risk of losing your money.