The sales and production sectors are not the only activities that attract investors, companies specialising in the provision of services are also well represented on the shares markets. This is the case with the Accenture Company, although maybe you have not heard of this company, but which is one of the most popular companies in the market. Here we will assist you in understanding how to complete a full analysis of this asset price with useful information and a historical share price analysis. 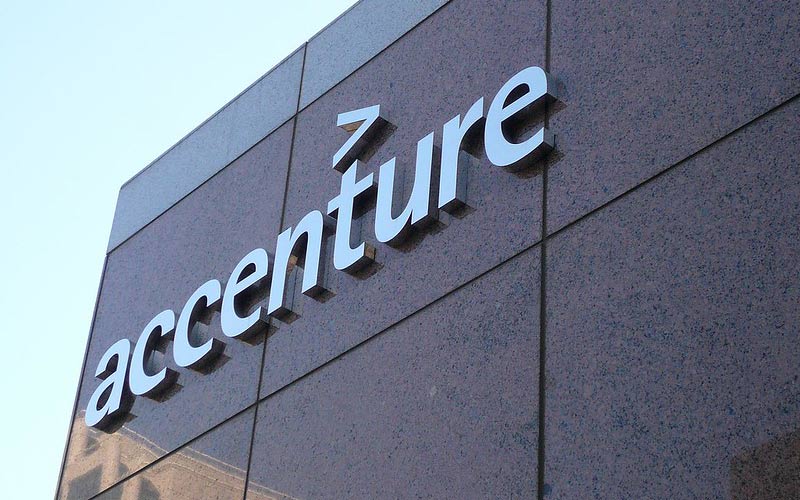 It's now official: Accenture Group will soon be cutting 25,000 jobs worldwide in order to cope with the current crisis. Read our explanations about this news.

Firstly it is of course recommended to follow all the news and events related to technology and IT, sectors that Accenture heavily relies upon.

The current economic crisis that is affecting a number of countries represents a gold mine for Accenture as because of the economical recession companies increasingly seek to rationalise their operations and reduce costs. As specialists in outsourcing, Accenture should continue to benefit from this economical situation.

We would of course carefully monitor the global strategy of Accenture and its establishment in new countries that will surely generate additional income.

You should also closely follow the penetration strategy of the mid range companies in which the group is still trying to position itself, with difficulty, due to its Premium image.

Generally speaking we would recommend you monitor movements in the market shares of this activity sector as well as bulletins, publications, news and events of this group’s larger competitors.

Finally, you should also monitor any possible threats to the profitability of this group such as movements in the online databases that could slowdown the growth possibilities of Accenture or even cause it to lose part of its revenue.

General presentation of the Accenture Company:

The Accenture Group is an American company specialised in management consultancy services, technological and outsourcing solutions. Although its advisory activities represent over half this company’s global turnover the outsourcing services also represent a major part, nearly 47% in fact.

The sectors targeted by this company are the automobile, distribution, travel and transport industries. The majority of its turnover is achieved in Europe and the Middle East.

Knowing the competition to Accenture shares:

The Accenture Group is currently the leader in business consultancy notably related to technological aspects and it is the second top supplier of IT services after IBM. It therefore has various competitors in the IT and technological services sectors which we offer you the opportunity to learn about here in detail.

The Accenture share price is quoted on the NYSE stock market in the United States. It is also included in the calculation of the S&P100 stock market index.

If you are contemplating investing in the Accenture share price shortly then you will need the information from a technical analysis together with a fundamental analysis so you can anticipate future movements in this share price on the markets. However, it is also extremely important to be aware of the position of the Accenture Company on the international market. Further to the information that we gave you earlier regarding the activities of this company and its historical share price over the last few years we now culminate this article by providing you with more general but still important information that will assist you in trading on the Accenture share price by implementing a successful trading strategy.

However, certain micro-movements can be observed during this period and notably since March 2018 with a growth in volatility. A primary correctional downtrend can be noted with the share price passing from 161 to 150 dollars between March and April 2018 before resuming a rise to 170 dollars in September 2018. Then we note a new downward correction to 135 dollars in January 2019 followed by a clear rise to 197 dollars, a historical record for this asset that was achieved in August 2019.

The advantages and strong points of Accenture shares as a stock market asset:

Firstly, it should be noted that the Accenture Group differentiates itself from its competitors through its specialisation in innovative technological solutions.

We also appreciate the international positioning strategy of this company as the Accenture Group exercises its activities in over 120 countries throughout the world which protects it from geo-economical risks.

Accenture also benefits from a significant position in the consultancy sector. In fact, at present, the group is placed among the most profitable companies in this sector worldwide which makes it even more attractive to investors and analysts.

The mobility management of the Accenture Group employees is also not left to chance and is in fact often highlighted as being one of the strong points of the company. By using the same procedures to approach different subjects and projects the employees can pass from one sector to another without further training or redeployment procedures.

Still relating to the strong points of the Accenture Group we do of course also note the well thought out marketing strategy of this group which invests heavily in the creation and advertising of brands that become well known through various communications channels open to the company.

Finally it is also clear that the Accenture Group can count on its significant workforce with no less than 250,000 employees worldwide.

The disadvantages and weak points of Accenture shares as stock market assets:

Firstly, the Accenture Group has not yet been able to position itself in the SME sector given the major competition it faces there. It is therefore highly dependent on the large companies that represent the majority of its client list.

The competition worldwide is also very strong for Accenture which must face giants in this activity sector and therefore needs to double its efforts simply to keep its position. This major competition contributes to a lack of growth in this company’s market share.

What are the important dates in the history of the Accenture group?

Several key dates are worth knowing if you wish to trade on the Accenture share price. In particular, we know that the company was founded in 1989 under the name Andersen Consulting following its separation from Arthur Andersen. In 2000, Andersen Consulting became Accenture and the company went public the following year, in 2001. Finally, in 2011, the group begins its massive digital and technology development strategy.

Does the Accenture Group have any subsidiaries?

When and on which market were Accenture shares floated on the stock exchange?

On July 19, 2001, Accenture shares were listed on the New York Stock Exchange at a price of $14.50 per share and on the New York Stock Exchange. Goldman Sachs and Morgan Stanley managed this transaction. At the end of the day, the stock will reach a price of $15.17 with a daily high of $15.25. This first trading session on the stock exchange enabled the group to raise $1.7 billion in funds.

--- Advertisement ---
Trade in Accenture shares!
76.4% of retail investor accounts lose money when trading CFDs with this provider. You should consider whether you understand how CFDs work, and whether you can afford to take the high risk of losing your money.